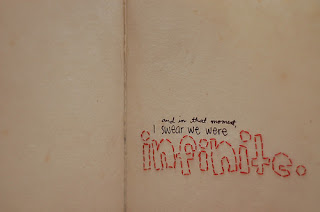 this is a love story.

however, unlike the one that is in your head brought upon by preconceived notion of a fairytale, this one doesn’t quite fit the bill.

in fact to be really honest, this is the love story found in the books unless you’re reading one of those really dark ones that i secretly love but i’m getting ahead of myself.

this is a story about a girl who had a crush on a boy that was way out of her league (ah, yes this begins with a classic geek, i’m not a cheerleader kind of plot, i have come to realize that yes, this part happens in real life all the time) but was given the chance to meet him around this time last year.

she was sweating buckets on that day and could hardly focus on her real day job but alas, finally the time came.

from the moment she met him, she thought that finally, her dreams were coming true, that this was the happily ever after that she has been waiting for.

fast forward to a year later and the girl could only look back with a little bit of regret but a lot of laughter.

oh how silly she has been.

turns out the dream boy was nothing but just that – a dream, an illusion of perfection but fell short on every single page.

truth is, he is a prince charming, but he just wasn’t hers.

he was an illusion of all sorts, one she created when she was 19.
the girl realized that the only thing in common with him and the guy she created in her head were their faces.

she then realized the dangers of falling in love (but in reality it was mere infatuation) with someone she didn’t even have a conversation with. that yes, it’s quite exciting in the movies but never quite as exciting in real life.

in a year, she got her ego crushed and her heart fauxly broken but she could just laugh if off now because it meant that finally she was giving up the notion andslash fake reality she created for herself that held her back for so long.

it was indeed nothing like she expected but it made something in her change and suddenly the things that used to matter about a person faded into a background.

in a year she learned about what truly mattered and what did not and she could only hope that the lessons would be worth the ego crushing experience, especially when she finally meets the prince charming who may be a little too busy with someone who isn’t his damsel.

the girl understands that it isn’t the time yet and she has to make use of the time in between to understand that maybe just maybe she doesn’t have to change who she is in order to be loved by the one God made just for her.

until then, ted mosby is just fine.

PS: okay, maybe that ted mosby bit revealed who the “girl” is but ee.