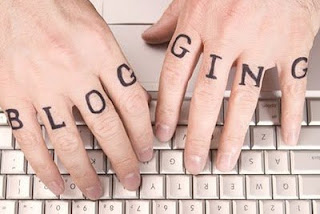 i have been blogging since 2004. yes, the internet has been filled with my fantastic blogs since i was 15. most of my blog entries were repetitive and most of them dealt with a whole lot of anger.

i was such an angry teenager (if you only met me in the past five years then you haven’t met my cynical alter ego, well you can drop by her sullen site: unauthorized.blogdrive.com i just realized that what’s uploaded on the net stays on the net) and when i look back on her entries, i realized that i have nothing in common with her, which is actually a good thing.
the only thing that held us together was our faith, but aside from that, she was an entirely different person.
it’s kindda nice to write whenever you feel like it, writing is such a release, for me at least. there’s nothing more exhilarating for me than sitting down and just typing my thoughts.
and now that i’ve been blogging for six years and it’s been such a big part of my life, i cannot imagine life without it.
i have no idea what happens when there’s no such thing as the internet anymore, but it would be nice to actually read this when i have grandkids of my own (i wonder what they’ll think of their grandmother when she was 22) and see how much i’ve changed.
what would be sad is actually if i didn’t change.
but i’ll leave that to my future self to worry about.
so i don’t know what’s going to happen tomorrow or if one day i’ll wake up and dislike blogging but for whatever it’s worth, i do like writing and i do like creating memories and my blog has always been there for me through thick and thin, through worthy and unworthy guys, through cheesy love songs and through bitter goodbyes.
so blog, this is an entry in homage to you, you’ve been a pretty great companion thus far. 🙂
cheers to the next six years together 🙂
PrevPrevious
NextNext
May 31, 2021
January 21, 2021