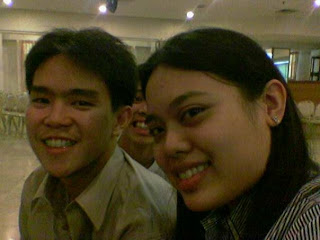 When I was in high school, I did “fall in love” like the rest of the people here on our lovely planet called Earth (I wonder if aliens get to experience the same thing, if not then they’re missing out on a lot!).
And his name is Carlo Yabyabin. If my memory serves me right, his entire name was Juan Carlo Acuna Yabyabin and we’re still in touch, although we don’t really have text marathons like we used to (aha, feeling! haha. I was after all, the fat girl in high school)
So anyway, for awhile I felt something bitter towards him because he ignored me and broke my heart in high school (can you blame the dude?) but you know I just realized what purpose he served in my life.
Just like the famous quote, “you only understand life backwards” or something like it.
Tita Maritess, my parents and I were talking about the end times and without even studying the prophetic Bible, I understood the seven years of tribulation and what came after that.
And a huge reason why I knew this is because of Carlo, because in second year high school, during one of those free cut classes, he told me all about it.
And just like that, I knew that the next guys that came after him would be good ones as well because you know even at fourteen, I was “in love” with a good seed already.
So Carlo, wherever you are right now: Thank you and tell the girl you’re with to take care of you because you’re a good one.
As for me, God’s still preparing his best and I know that he’ll be similiar to the first guy I truly “loved”.
PrevPrevious
NextNext
January 21, 2021