Menu
Just You and me. You and Me. 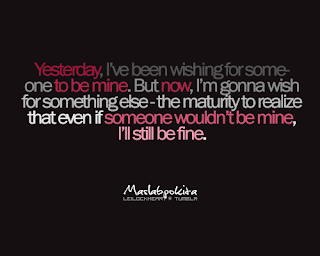 (Tumblr is so cheesy, no wonder why kids these days are so emotional– but this picture is cute even if it’s a bit extreme.)
So today a bomb dropped. My two year infatuation with someone who used to be afraid of commitment (apparently, he isn’t anymore) has committed and declared it all over facebook.
I didn’t feel anything when I saw this confirmation, but after awhile I did weep, not because I was heartbroken but because I cry over every single thing.
Just kidding.
Well, I don’t know what to feel really because I’ve been trying not to think using my emotions anymore. But I guess today I just felt that I shouldn’t really let it control me anymore.
I probably cried out of the freedom I felt from it. Because no matter how many times I deny it or not, I know that as long as the both of us were not budging from the place we were two years ago, we couldn’t really move on from it– whatever the mess it was.
So today marked that goodbye. It’s kind of ironic because a few hours earlier that discovery- God answered a fervent prayer of mine.
I used to run away you know. I used to dump my emotions on another person. I used to think that another person would take care of me and take away all the hurt.
I guess I’ve used up a lot of blog entries saying that I no longer seek that in another person.
Instead I’ve learned to seek Him first, my one true love.
It’s not the easiest thing, but His grace overcomes everything. And although it hurts and stings a bit, I know that my prayers are not falling on deaf ears.
I know God is on my side and I know that all of my tears are in a bottle. I also realized today that it’s okay to cry, it’s okay to let the anger out but after awhile, it would be wise to pick ourselves up and trust that God hears us, no matter how painful it may be, He doesn’t waste a single pain that we go through so let’s trust in Him.
I trust You, Lord and I know that as I surrender this time of my life to You, You will protect me and You will show me things.
I can’t wait to spend all my time with You, for in You, I am healed, complete and made whole.
PrevPrevious
NextNext
January 21, 2021