Menu
So He’s Just Not That Into Me? 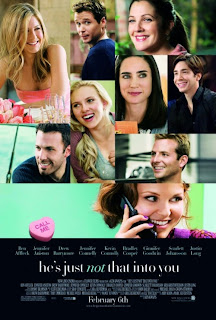 “Girls are taught a lot of stuff growing up: if a boy punches you he likes you, never try to trim your own bangs, and someday you will meet a wonderful guy and get your very own happy ending. every movie we see, every story we’re told implores us to wait for it: the third act twist, the unexpected declaration of love, the exception to the rule. But sometimes we’re so focused on finding our happy ending we don’t learn how to read the signs. How to tell the ones who want us from the ones who don’t, the ones who will stay and the ones who will leave and maybe a happy ending doesn’t include a guy, maybe it’s you, on your own, picking up the pieces and starting over, freeing yourself up for something better in the future. maybe the happy ending is just moving on. or maybe the happy ending is this: knowing after all the unreturned phone calls and broken-hearts, through the blunders and misread signals, through all the pain and embarrassment… You never gave up hope. “
I was probably the last person who saw He’s Just Not That Into You and I enjoyed it in a bittersweet and probably because I can relate to Gigi’s character the most (I know, I know, it’s kindda embarassing!) but I think the movie was cute and I haven’t seen cute movies in awhile (I saw The Uninvited over the weekend as well, now that is a good movie! ha ha).
It’s funny how all girls act idiotic around the men that they like, we always think that guys want to play games when in reality they’re just not that into you.
It’s kindda sad and upsetting but in reality, we’re just too prideful (is that a word?) to admit that he doesn’t like me. I think girls should understand that it really has nothing to do with them, some guys just don’t like you (ouch, i know).
But, there’s a big BUT, it doesn’t mean that you’re never going to get that happy ending, because just like all the girls in the movie, you will!
It just takes time, patience, numerous heartbreaks, rejections and nights drowning in ice cream, but you know it’s all good, because I’ve been told that it’s pretty worth it.
I think our lives would be simpler if we realize the nuggets taught in the book and the movie. 🙂
Another realization: Justin Long is cute! ha ha.
PrevPrevious
NextNext
January 21, 2021