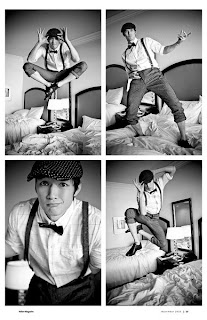 I have this shameless obsession on the “other asian” from Glee.

I remember clearly when my friend, Thara kept talking about him during the first season and since I was so into The Schue and Finn, I couldn’t quite figure out who the hell Harry Shum Jr. was until that crazy episode at the beginning of the season.

I must admit, it was tv land love at first look.


And after that crazy Somebody to Love number, I knew I was in love.

In reality, I couldn’t really speak about the reasons why I think Harry Shum Jr. is awesome other than what I find on the internet, but I guess this obsession with a semi-imaginary guy came at the right time.

I’m trying to be objective about this blog entry and I’m really trying to say what I mean without dissing anyone or speaking ill of anyone.

Well let’s just put it this way, i’ve always been attracted to the same type of boys, you know the ones who party all night, date all the pretty girls just to see if he’s got the swag or not, basically self-centered, selfish guys boys who never had the chance to grow up.

Guys with no drive, no passion and lived for themselves and no one else.

I don’t know really if this is affected by the way I see myself but I suddenly found myself wanting out of that hell hole.

I’ve had enough of those boys.

I’ve had enough of those boys who would put me down just to feel good about themselves. Also tired of saving guys when I should really just be worrying about the guy and how he treats me as a princess.

I’m not saying that girls should get the free card but i think girls deserve a guy who actually want something in life and would do absolutely do anything to get there.

I guess the real reason for this Harry Shum Jr. effect is passion.

You see Harry Shum Jr. and you don’t just see his abs or his amazing dance moves, I look at him and I see someone who is so passionate about what he’s doing that he’ll do absolutely anything to do what he loves to do and he doesn’t mind sharing it with someone else or the world.


For once in my life, I want a guy who would be passionate about life, about something other than being the most famous, having the most twitter followers or getting a celebrity girlfriend to up his status.


i want a guy who is so passionate about his life and everything in it, not about the number of ladies he has.


i guess to sum it all up, it helps to say that I want a man and not a boy.

and it really wouldn’t hurt if he did look like Mike Chang.

a girl can dream.