Menu
The Tax of the Matter 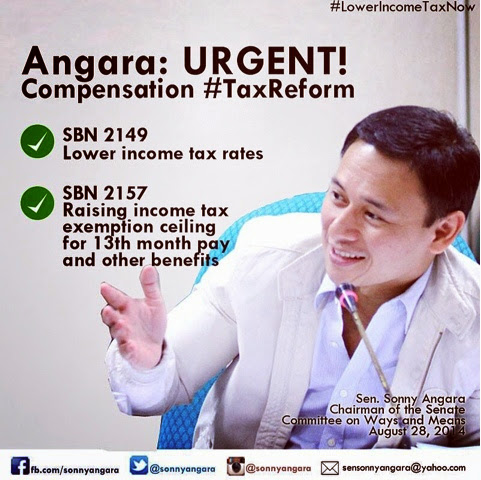 Among the least topics that cross a youth’s mind is the country’s tax issue.

Things, however, are about to change for the younger generation as the impressionable Sen. Sonny Angara guns for a change in the tax system of the country.

Just on his first term, Angara has already been lauded from voters of all ages for his courage in talking about topics that used to be taboo, including the much-needed reform in the tax system of the country.

The senator, who was kind enough to give some of his time to a young writer, commented, “Our Constitution says that our tax system should be progressive—that is the rate it imposes on a person should be based on a person’s ability to pay. That is why our tax system is divided into income brackets: the higher your income, the higher your tax rate.”

The idea, just like anything else, is wonderful on paper. But the senator points out that the last time the tax code was amended was in 1997. And since then prices have increased, and the cost-of-living has roughly doubled. For example, an annual income of P500,000 today buys far less than what the same income could in 1997.

“As a result, many in the middle class—like yuppies—are squeezed tight for taxes from their incomes. And while income brackets remain unchanged, people who should really be paying less tax are forced to pay more because they are pushed to higher brackets,” he noted.

For someone who deals with only basic accounting, taxes never made much sense until now. Now, I’m beginning to understand why my pay increases were not doing much for me.

The senator continued to point out that the “Philippines has among the highest tax rates in the Asean.” Here, a taxable annual income of above P500,00 is taxed the highest, 32 percent as compared to 10 percent in Thailand, 11 percent in Malaysia, and 20 percent in Vietnam.

And the young Angara also believes that this is one factor why many Filipinos choose to migrate.

Asked how this affects the young people, the personable senator replied, “Under the current system, a mid-level manager with gross income of P60,000 is taxed at the highest 32 percent, which is the same rate imposed on the CEO of the company the mid-level manager works for. Such situations underline just how unfair our tax system can be—making it important that we update, reform and transform it.

“We need tax reforms because the current system imposes too much of a burden on Filipinos and their families, while letting those at the top of the pack continue their trek forward. We need to lower income taxes now because all too easily does the current system dash the hopes and dreams of our young upstarts.”

For him, the solution lies in Senate Bill 2149 (SB 2149), which he is working day and night to pass. Broadly, SB 2149 can lower the tax burden of each taxpayer. This could not only increase take-home pay, it also allows citizens to have more choices in spending.

He emphasized, “We want to do this by adjusting tax rates and tax brackets. For instance, under our measure, we want to lower the highest tax imposed of 32 percent to 25 percent by 2017.”

Fortunately, if passed, young professionals will also benefit. Instead of burdening them with paying such unfair taxes, they will be encouraged and empowered by the government to build their future.

Indeed, Angara’s passion is undeniable and inspiring. Asked why he doesn’t become jaded despite the many things the government has and hasn’t done, he explained, “The government is actually a very big institution, representing different sectors and employing people of varying walks of life. Whatever it is that we see, hear or read in the news sometimes misrepresents government as a whole.”

More importantly, a change in perspective is the only thing that one needs to believe in the government again. That instead of the corruption of top officials, Filipinos must recognize rank-and-file government employees who work tirelessly.

They are “public school teachers who go the ‘extra mile’ every day for their students; policemen and soldiers who are not feared but appreciated by the communities they protect; or managers and administrators who spend long office hours just to provide the best public service their agencies can offer,” he described.

He added, “The untiring service these people render is what I hope more of the younger generation gets to hear about and understand.

He ended, “Government is only as good as the trust reposed in it, which is why we in government must do what we can to earn the trust and confidence of the people we serve.”

With senators like him, young ones like us finally feel that we are getting our money’s worth. He also fuels us to believe that yes, a better tomorrow is possible and not just a passing dream.