Menu
Who Won The Dating Game? ME. 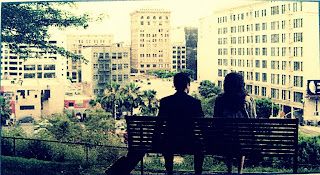 I meant to write this about a week ago, but couldn’t seem to pin the thoughts that graciously swim around my head like Dory and Marlin.

For a week, it was a constant “should i” or “should i not” debate in my head. Originally, when I created this mini world of mine on the internet, the sole purpose of it was to pour out my emotions like Peyton Sawyer on that webcam of hers.

Unfortunately when I was 15, my emotions consisted purely of that “jerk” in high school (who isn’t really a jerk, he’s probably one of the nicest people I know) and “mean girls” (there’s some truth to this). This is all probably pretty much typical adolescent behavior, but my mini world in cyberspace didn’t well, really contribute much happiness in the world.

However, I have come to realize that writing entirely personal entries on my blog was out of base simply because I don’t think the world cares that much about how many times I cry to Britney Spears’ “From The Bottom of My Broken Heart” and also there’s already too much broken hearts in the world, the world doesn’t need another version of it.

What they need is a story of hope. A story that proves that after the heartache and pain and journal ripping efforts, it is worth something.

I am kind of hoping that this story is more about that and less the bitter, “I am better without you, foo” we always pretend we’re about.

After someone a) breaks up with you or b)  tramples on your heart with this, “hey we weren’t exclusive right?” or c) leaves you with a , “you’re too fat to be seen with me”, there is only one response, “i will be with someone better than you.”


Some of us deny this truth by singing Someone Like You at the top of our lungs while some belt out I Will Survive relentlessly, although still trying to look back wondering if he heard us.

But the point is there, defined or not, we all wish to pay that person back by being with someone better.

In the past four years, I must admit although I am definitely not proud of it but that has been my goal.

I was brokenhearted for the first time, for real this time, by someone I wasn’t even in a relationship with (yes, I will leave you guessing which letter above is correct).

I was, well for the most part, angry and spent hours in the gym (there’s a clue for you) and started “going out”, since wasn’t that what you were supposed to do? Find Chris Evans and show him that hey you can choose someone better than him who wasn’t ashamed to tell the world that you were his.

I dare not recount those dark days.

Yes, I have remained physically pure, but not much could be said about my emotional state. I was lost in translation, wondering if this Channing Tatum look alike, even if we had nothing in common, was the answer to all my shame and humiliation.

It did not matter to me whether or not it was in God’s timing or if God wanted me to be with anyone at the moment. All I cared about was getting even.

And of course, there was that whole “who dated first?” and “who is better off?”, but in those four years, God made sure that I had none of that. All the potential relationships fell into pieces it was not even funny anymore, I would often jokingly tell my friends that God loves me too much to give me to the wrong one.

I kept asking God why. I kept questioning God as to why Channing Tatum hasn’t arrived on my doorstep yet. Why. Why. Why.

I was hurt. I have been offended more times than anyone can imagine and the only way I could heal was to have that boy trophy in my life.

Yes, it was stupidity, my wounded pride left me blinded to the truth about the One who loved me the most.

Every time a would be relationship fell apart, I went back to Jesus, but then got distracted when a good looking, could be possible in your face boy, came my way.

Whenever someone told me about God’s best, which I have memorized thanks to I Kissed Dating Goodbye, I always assumed it was Chris Evans in the flesh. I always thought that His best meant that I was vindicated ala Hilary Duff in A Cinderella Story.

What I didn’t realize was God’s best was Himself and His love.


Okay, if you’re brokenhearted at this moment and still licking your wounds, you’re probably thinking, “I can’t believe she said that. I can’t believe I read so much into her gabbing and I end with this boring thing.”

I know what you’re thinking because I was in your position. Wiser friends told me get lost in Jesus and I simply replied sarcastically in my head, “Maybe I will once I see his face shocked because I was with this person and he was just with that.”

That was how mad I was and I kept that anger in for a really long time. I was prideful and I demanded for God to go down to my level of shallowness because I thought that this was going to solve my problems.

But you know, that wouldn’t have solved my problems. Because I knew deep inside that my insecurities were not initially caused by Mr. 2008, they have been there a long time and Mr. Chris Evans Trophy Boy was not going to make that go away.

I was plagued with insecurities and felt like crying whenever a beautiful girl entered the  room because I knew in my heart that the boy I was with will see how ugly I was and leave me for her.

I was that deep seated in lies and in insecurity. I wanted to feel special and when Mr. 2008 did not give that to me, I wanted to avenge myself.

I was dealing with something that was bigger than myself, years of torment and envy could not be erased, that one afternoon I just broke down, cried and said, “Lord, I know a relationship will not heal me. You could send me the person I am meant to be with right now and I know I still wouldn’t be happy.”

Of course, I didn’t sound that profound and there were a lot of sniffles et. all and buckets of tears, but you know after that quick cry of help, I felt something lift. Like someone saying, “Finally, my child you understand.”

Now, the change didn’t happen overnight and up until recently, I still felt the feeling of revenge wanting to creep out of my system and yes, I did cry when he won the dating game and found out that he was already in a solid relationship.

I was pretty much like Tom Hansen in 500 Days of Summer. I was questioning how someone could jump from being non-committal to being extremely committed in just a matter of months.

And yet, God’s love melted all my questions away by simply saying, “I know what I am doing, let it go.” And eventually, although I still don’t know how, I did let go. I didn’t even realize that I have until a few weeks ago.

There she was standing right in front of me, the girl who was responsible of turning into someone with major commitment issues into a solid, committed guy and you know what, I just wanted to hug her.

Unlike the person I was before His love transformed me, I was just happy that they found each other and that even if it wasn’t with me, he was finally found happiness, something that I truly truly wanted for him.

And I wish the both of them the best. Really, I do.

And although days aren’t perfect and there are still days when I wonder why God just doesn’t tell me to start collecting cats and demanding Him to tell me if I was going to be alone forever, I am good and definitely better off than I was before.

I no longer cringe when I see beautiful girls and actually admire them for the beautiful creature that they are. I no longer search for Chris Pine in the crowd and have said goodbye to Dear John long ago (who is also happy on his own, but that is entirely a different story).

It continues to be a process and no days are certain, but I am telling you this right now, all it takes is a whisper, that God doesn’t need you to be perfect to be accepted by Him. He just wants you to come to Him as you are and tell Him where it hurts and you will be amazed at how He can heal you. You see God just doesn’t put a band aid on the wound (in reference to that perfect boy for revenge) but He holds your hand while He examines your heart, gets rid of what isn’t good for you (or meant for you) and mends it back together, as if it was brand new. The battle scars are there but only to remind you of His purposes, it’s funny how they no longer hurt, they are just reminders of how brave you have been.


“The Lord is close to the brokenhearted. He rescues the crushed in spirit.” – Psalm 34:18.

And trust me, He is the only One who keeps all of His promises.
I may have not won in the numbers game, but I think I won the “who has the better relationship game” simply because I am in a relationship with the only One who  loves me unconditionally (yes, even on my cellulite days) and Someone who is proud to call me HIS.
I wish for nothing but the same for you. So, wipe away your tears and enter into the best relationship you would ever be in.


Trust me, it is worth it.
PrevPrevious
NextNext