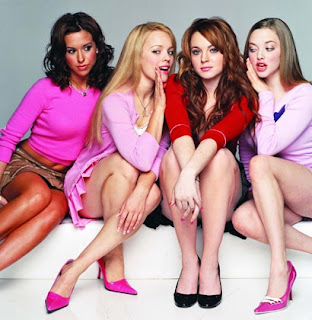 every girl has a mean girl syndrome.
you know every single girl who has ever walked the face of the earth has succumbed to it, but that doesn’t mean that it makes sense.
it only means that at one point, you felt like you wanted to kill a girl just because of something as random as your guy texting her or you having the same outfit, or even something as simple as not liking how she looked at you.
i know i know, no girl is safe, every girl has gone through it and on less stellar reasons.
i look back on the catfights that i’ve had or the angry monologues about girls i hated just because they were stick thin and i wasn’t and i couldn’t help but shake my head.
i didn’t realize that i spent so many hours agonizing over what i didn’t have and over what she had. there’s so many rivalries in my lifetime and i was in constant competition with every girl i meet.
i’d even go as low as shoving someone in the mall just because i didn’t like the way she laughed or how she looked (but deep inside, i knew i was simply jealous because she was pretty and i wasn’t, however i defined pretty is not important).
and you know, i thought i was hurting them, i had so much insecurities and anger and pain inside that the only way i could relate to others was through negativity: bashing, criticism and backstabbing.
i could only admit it now because somehow, i’ve found the light through it all and the Lord has given me the grace to be able to see the real me, despite my weaknesses. because yes, He does tell us where we have to improve but at the same time, He does pour out His grace so we can change, but never without Him working in us.
it’s really more of a heart issue than anything. before you could stop backstabbing or stop trying to ruin someone’s reputation just because i want to hurt them the way that they hurt me, you have to look inside your heart and accept that, “yes i’m not perfect but it’s okay, i’m okay with me”

i’ve only come to this outstanding truth when a girl (who i’m actually cool with now) unbashedley blogged about me just because she thought i was “secretly” dating her boyfriend when in truth, i was actually helping him in repairing their relationship.

i guess it’s our love for drama and it also stems from insecurity. you know when a guy is wonderful, we readily want to fight off every girl that comes across his path and destroy them because we’re possesive like that.
it’s the way things are. it’s our protective instinct although at times, we do go overboard because we get our facts and our overactive imagination messed up. sometimes logic never hits the right spot and our worries are really more extreme than the situation at hand.
it’s a mystery to me, and i’m a girl, why we must always be the best in everything and why we must have the most number of suitors.
it’s probably the way society motivated us, but this is the age of the iPad (okay, i had to shove that in!) and girls are getting more degrees than men, so what’s there to prove?
it takes a lot to be secured, i get that. i still get fat days and you know, not every guy i meet likes me, but it’s okay. it’s okay that i’m not a size zero, it’s okay that i’m not considered a hot girl and most of my guy friends are just that, guy friends who see me more of a bro than a well you get it.
it’s okay that i’m not as mestiza as my sister. IT’S FREAKIN FINE.
because i’ve figured that if the Lord wanted me to be any of those things, He would have. but He didn’t and i don’t say that bitterly but instead i say it with pride that the Lord made me this way for a purpose (maybe become a spokesperson for those who are plain janes?) and i surrender everything because well, what else would be the other purpose of my life, right?
and when i truly recognized this truth, that’s when i saw the joy in living. the joy in appreciating where you are and what you have and although my love for fashion and everything in between has not declined, my desire to please people has left, my desire to be iest has flooded away and i’ve learned to love every inch of who God made me to be (yes including the fact that i tower over every single guy in a ten kilometer parameter).
and because i’ve accepted who God made me to be and who He designed me to be,my mean girl tendencies have flooded away.
but this doesn’t make me saint, i do have jealous fits and i still feel insecure after eating oreos (not just some, but all) and i still feel insulted after a fat joke is thrown, but before i let my insecurities win over me the way it used to so many times before, i let it go. instead, i focus on offering a smile instead.
and suprisingly, i’ve gotten along more with people and i know it’s a process and it doesn’t happen overnight, but you’d realize things changing and you’d just know that God is faithful because He is.
besides, which guy is worth all that self-destruction for?
unless you’re Ted Mosby, i highly doubt that any guy would be worth it.
PrevPrevious
NextNext
January 21, 2022