Menu
How To Love Mundane Mondays

Yes, in as much as I try to be Little Miss Sunshine, Mondays can rain down on my parade as much as the next person.

It’s not just the traffic that gets to me. It’s the transition of leaving the weekend persona behind with all its promise of calm and comfort in exchange for deadlines, people, and just the rush of getting things done. It’s extracting yourself from the calmness and throwing yourself into the fire.

I’ve had a series of not so happy Mondays in the past month and today, I made sure to no longer make this Monday just like the rest. So instead of checking my phone at the crack of dawn, I went straight downstairs to make myself coffee, put on my gym clothes, and attack the gym. On the way there, I listened to Pastor Steven Furtick’s How to Love The Mud and the messes in one’s life were discussed thoroughly. If you are anything like me, we don’t like it when things are in disarray, we like order, we like knowing what’s next, and most importantly, we like being in a place of stability.

But of course, life is never quite as clean or perfect as we’d like it to be.

You see the main reason why Mondays felt so mundane to me was because of one thing – they were messy. In a way, the weekend takes you away from the chaotic realities of life and Monday jolts you back in. Somehow, weekends mean kicking the chaos under the bed while Mondays meant the troubles were back at it again.

Unknowingly, I began depending on my circumstances to change before getting my Little Sunshine spirit back without realizing that sometimes, all it takes is a shift in perspective.

Yes, life is messy. Yes, life is chaotic. Yes, there is a terrible amount of pressure attached to it. BUT that doesn’t mean that it is going to last forever. It only means that there is progress in the middle of all the mess. Pastor Steven likened it to a cook in the kitchen — a clean kitchen meant that the cook wasn’t preparing anything while a messy one meant that a feast is about to be served.

In my mind, it suddenly made sense. The mess doesn’t mean that I am screwed and my life isn’t going anywhere, the mud of my life simply meant that my life is taking shape. It’s cutting off edges, it’s molding me into a better, less arrogant version of myself, and getting me prepared for whatever is next. God always has something up His sleeve for His children and often, it’s the season where we don’t feel Him the most or question His presence the most is when He is doing the work He has intended.

Knowing this doesn’t make the situation easier but it boosts my confidence because sometimes the only way you can get through it is knowing that towards the end of a particular season, there is a reward. The reward can be a season of harvest (which of course is highly likely) but of course, the eternal rewards are far greater. In seasons of chaos, you learn to depend greatly on God, learn a thing or two about humility, and create a depth within you that wasn’t there before.

Mondays may never be a favorite but I am slowly learning to appreciate it more because Mondays mean I get to step out into another week with brand new opportunities. It also means (and this is particularly true for me) that while I may be in a dark and challenging season, a Monday means I am closer to the end of it.

So with that, I chug a little more of my coffee because while I am friendlier with Mondays, I still do need a lot more coffee to survive. 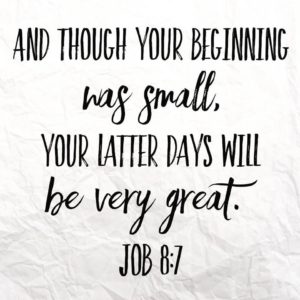