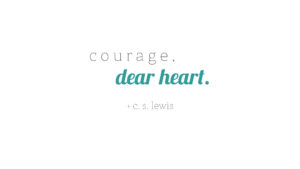 “Courage doesn’t always roar, sometimes courage is the quiet voice at the end of the day saying ‘I will try again tomorrow'” – Mary Ann Radmacher

As of late, life has been one big reflective party. Very withdrawn from who I used to be and who I once aspired to be, I see myself drift away slowly from the shallowness of my former self and into the depths of someone with a deeper story to tell.

At the beginning of the year, I asked God to change my heart and to make it more reflective of His. Lesson number one: be careful what you pray for because our God, as merciful as He is, answers in ways that only He can. This year, my desires were tested: Why am I doing what I am doing? Why am I where I am? Why did I marry the man I married?

The year has been nothing short of whimsical and spontaneous. I married a man I’ve only known for less than a year, quit a job that I have been comfortably in for three years, closed doors on friendships that were no longer aligned with my current values, and went against everything I was taught to live a life that is painstakingly mine.

As I traversed into a new wave of consciousness, I would be the first to admit that nothing is easy. When we are told to go after the life we want, to marry the one who makes our heart flutter, and to take on our dream job, the enormity of the challenges faced are often minimized.

I would be the first to tell you: it’s not easy. Going after the life we want takes an indomitable amount of courage but also of humility. The world tells us to be brave but it rarely tells us to be humble. As you go through life changes, you will know more and more the importance of humility. Bravery, for all of its intents and purposes, is significant but getting down on your knees, rolling up your sleeves, and taking on the impossible begins with softening your heart.

As an young, rather arrogant millenial, I thought taking on the world meant having my nose up in the air, pretending to know it all as a way to reflect my psuedo confidence. Growing up insecure, I thought that being confident meant not asking for help or admitting to my mistakes. But in truth, the courage to begin a task, no matter how daunting it is, begins by first admitting that yes I would be needing help.

It also means giving up on a specific perception of life and understanding that while my life isn’t where I expect it to be at this point at least I was man enough to go for the life that I want. Getting to where we want to be isn’t always a clean path, it’s filled with dragons, demons (both of our own and others), and shadows. It’s messy and it takes courage to admit that hey, this isn’t how I envisioned it in my head but I can keep going.

It also takes humility to laugh at your life and say to yourself, this is not going as planned and yet still have the courage to try again. As my dad always says, life isn’t a fairytale but we can choose to make it what we want it if we just learn to buckle down and believe that no matter what life throws against you, it can still be better than what we have imagined.