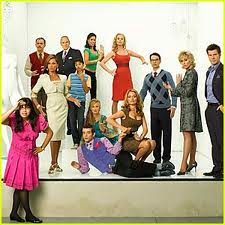 it marks an end of an era for me. an era of betty, daniel and mode.

only a few minutes ago, i finally said goodbye to Ugly Betty and their whole twisted world.
i’ve always been a fan of ugly betty since i’ve always loved America Fererra and I remember clearly watching the Spanish version when i was a kid.
Ugly Betty never failed me, not even once. I came across Betty just a few months after i graduated from college and from the first episode alone, i immediately fell in love with her simply because i know that i could relate to her and her quirkiness.
in my heart, i knew that i was betty. i didn’t have the braces, but i definitely had the glasses and the optimism.
and now that the series concluded, seriously i am still in tears.
don’t get me wrong, i absolutely loved the ending! i loved the fact that betty ended up with daniel and that daniel finally turned his life around and all because of this quirky secretary who was wearing a hideous poncho on her first day at work.
betty was there for me on my first day at work in 2007. she was there for me in the mornings while getting ready for work that i no longer want to go to. betty made me feel that someday i’d find my henry, who eventually became gio, who later on became matt and who eventually fell on daniel.
isn’t that amazing? i love it because finally, the nice girl gets the hot guy and it’s not for ego’s sake.
we’re all little, bettys inside. we all feel that we don’t deserve the kind of love that changes us from the inside out. we don’t think that just because we’re not a size 4 we don’t deserve our very own daniel meade.
but look at betty, she was hired because bradford thought that daniel would never take an interest in her, and look where she is, four years later, in London, falling in love with daniel meade.
it’s not just about daniel meade really.
it’s about the fact that in four years, despite all the challenges that she faced, despite all the pain and the heartbreak, betty remained positive and she believed that no matter what, things were going to turn around for good.
and they did.
as betty walked into the busy streets of London, i felt my heart pump with excitement because even in the littlest things you see that God works and He is real.
seeing the conclusion of betty tonight just really made me hopeful, that soon enough, things will turn out the way that He wants them to.
and soon enough, when i least expect it, daniel meade will walk into my life and it would definitely be worth it.
just ask betty.
PrevPrevious
NextNext
January 21, 2021