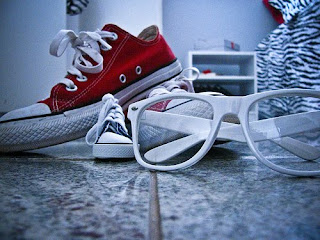 i’m not chinita. i am also not stick thin. i also don’t think dancing in sweaty dark rooms and drinking all night is cool.
i also don’t think i’m a girl’s girl. i also like being alone. i love reading a book and gushing on my own. i love watching all the lovestruck tv shows every invented and i love being with little kids. i also don’t play games. i also don’t pretend to be dumb just to be liked. i love hanging out with my family. i love staying at home and the oddest things make me happy. i love blogging for crying out loud, i’m the biggest geek you’d ever meet and i’m not just saying that because suddenly oversized glasses are cool.
i’m saying that because that’s who i am.
i used to hide that girl. i used to hide the girl who couldn’t talk to people and rather write about them on her six year old blog. i used to be ashamed of her because society dictates that in order to be a cool girl, you have to be sipping a drink, puffing a cigarette and breaking guys’ hearts just by walking in the room.
i thought that was the only girl that deserved the spotlight. it also made me think that guys and people would be bored with me because i could never stay up past 12.
secretly, i liked who i am but i wasn’t strong enough to show people who i was. i was too busy trying to be stick thin, trying to be chinita and hated everyone who was. i was busy being bitter, that i forgot to step aside and see me as the person God made me to be.
if God wanted me to be chinita, or if he wanted me to be with a guy who only appreciated chinitas and the korean invasion or taiwanese or japanese, whatever, then he would have made my eyes smaller and a few inches shorter.
but He didn’t.
He made me five eight tall and gave me eyes that would give Bambi a run for her money. there’s nothing oriental-ish about me. i actually don’t know what lineage i show, but it’s definitely not some chinita chick from ateneo (or la salle).
i’ve spent all my life trying to run from who i was and the things that i enjoyed, i insisted on becoming someone i clearly wasn’t just to be rejected by someone who wants San Chai, not Hailey (i’m watching One Tree Hill again so sue me!).
i like writing. i like reading. i like googling random stuff, stuff that no one cares about. i love joking around with my students, i feel alive when i’m with them. i’ll probably not be a clingy girlfriend and i’ll probably not want him telling me how to dress and most importantly, i have no time or room to flirt and make a guy feel good about himself because he can’t do it himself.
i love learning and i’d love to learn from my partner. most importantly, i’d love to have someone beside me because He feels that’s where God wants Him to be and not just because i’m chinita or whatever.
i want a relationship that doesn’t rely on dates or cheap flirting techniques. that means that’s a relationship with someone who appreciates the little quirks i have without comparing me to everyone else.
and if it takes longer for that guy to arrive because i am, admittedly one weird chick, then it’s okay.
because for the first time in a really really long time, i don’t need it.
i don’t need it to feel good about myself. i don’t need it to validate how worthy i am and i don’t need it to validate what my standing in life is.
because for one thing, i am loved by the One who created me and therefore, He is filling my life with people that I need at this particular time of my life.
and because He loves me and He accepts me for who He made me to be, it’s not too difficult for me to love and accept myself the way He made me.
God is a lot of things. He’s a lot of things to me, but the one thing that He isn’t it’s this: He doesn’t make mistakes.
He created me this way and it’s my job to love the life He sent His son for and be thankful that everyday, there’s a blessing that manifests itself that allows me to love His creation more.
God is truly good and no, i don’t think i need to be chinita to appreciate that.
*disclaimer: nothing against chinitas, i think you are the most beautiful girls on earth, i was merely stating a point. it’s the same as saying supermodel but for me the chinitas have it good! 🙂
PrevPrevious
NextNext
January 21, 2021