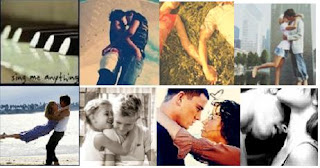 And I am not talking about Christmas!!
I am proud to say that I am not obsessing about V-day this year, unlike last year. I haven’t actually noticed the fact that it would be V-day on Wednesday until I read the papers today.

However, it still annoyed me that everything was bout valentine’s day but I am no longer as cynical as I used to be. So allow me to be a bit mushy, okay?

I am proud to say that I have stopped wishing on destiny. If there would be someone for me, he would appear… at the right time. I don’t have to look for him neither must I change myself and how I look because when he comes he’d like me for who I am and vice versa.

The journey of searching for love that happened three years ago has stopped. I no longer search for it, no longer do I cry over the fact that my crush-of-the moment hasn’t reciprocated my “love” for him. Hard to believe but I also stopped having crushes on REAL GUYS ( Roddick, Timberlake, Federer and my beloved, Dicaprio doesn’t really count), what’s the point of being useless on such useless thing?

This may be an embarrassing thing to say but there was a guy, who wasn’t from school, who I liked for such a long time and there was a time (erk) when I’d get up in the morning and feel so bad because he wasn’t interested. I never told him that I liked him though or did anything to make him feel that he’s special. But I’m the type of person who would just know if a guy doesn’t like me and for a very painful year that consumed my life.
It was stupid.
It was stupid to base my happiness on just that.
The Lord took away the emotions because I asked him to, that person was definitely not for me and He made me realize that.

Maybe that’s the reason why I am not cynical anymore, instead, I’m celebrating because you know what?

I create my own happiness and never again would I depend on a man to make me happy. I can do that on my own, my family can do that for me.

The Lord can do that for me.

And that my friend, is definitely worth smiling about.

Hope you find something to smile about too this week.
Have a great mushy week!:)
PrevPrevious
NextNext