Menu
The Things I Learned From Ted 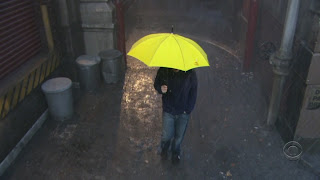 So I remember this scene from season 3 where Ted walks out of a club with a yellow umbrella that belonged to his future wife and future mother of his two adorable kids without realizing that it was hers.
The closing line from that episode went something like this, “Your mother was in the same club that night, but we haven’t met, which is a good thing, I don’t think she would have liked me, heck, I wouldn’t even like me.”
And after being addicted to it for a week, I’ve realized a few precious lesson from “THE-TV-GUY-I’D-DEFINITELY-MARRY.” (sorry mcdreamy, pacey and nathan scott, we definitely had good times together)
1) It’s okay to be a romantic

– Ted Mosby is perfect because he believes in romance and is the exact opposite of Barney “wait for it” Stinson (who is every single guy that I have met so far). He believes in wooing a girl and he believes in being faithful (SERIOUSLY, IN THIS DAY AND AGE A GUY WHO IS FAITHFUL!!!!!!!!!!!!!!!!!!!!!!!!!!!!!!!!!!). He’s that type of guy, the guy you take home to mom and although he’s “TED THE CORRECTOR” it’s kind of sweet. So I’m not afraid to say that I do have a romantic side, although all these broken hearts and all these false hopes is turning me over to the dark side (I REALLY HOPE NOT.)

2) It’s okay to go through rotten ones.
-Speaking of broken hearts, Ted has had a lot of them. If he was a real person, I wouldn’t even think of any reason why any girl would want to break his heart (seriously Robin, you are hot, but you are dumb, dumb, dumb!). I mean this perfect creature, why? But I guess it’s okay that Ted went through all these “this-girl-is-the-one-but-they’re-really-not” ladies just so he could actually meet yellow umbrella girl who turns out to be his wife. Pretty amazing that our biggest mistakes are the biggest roadsigns that would lead us to wait for it, “THE ONE”.
3) All these twisted roads lead to someone, or somewhere special.
-No matter how much I love HIMYM (just for the record, I hate abbreviating it like this) there are pretty pointless episodes but it’s okay, I don’t love it any less because all these meaningless episodes actually mean something. It means that no matter how little or insignificant several things are, they all play into this beautiful love story that He is crafting for us. Yes, we get impatient and i’m seriously at a point where I’m just really mad at all guys (except Ted of course, and you, Nicollo!) but other than that, they do get annoying but this is probably a phase. Anyway, not the point, it all means that we’re on this road that leads to somewhere special. We just really need to think that every disappointment would lead to something great. I’m sure of that.
4) It’s never cool to wear red cowboy boots and it’s never cool to kiss Mandy Moore.
– The tramp stamp was just hideous and the boots, oh mi gee, the boots!!!!!!!!!!!!!!!!!! But he’s so perfect, which guy can get away with it??? Definitely pulling it off baaabyy.
5) Safe to say, it’s stupid to think that everyone is “the one”
– This is a mistake I personally admit to. You know everything’s great at the beginning but in the middle of it, you realize that “No, this is not the one. This is not working” and yet for some weird reason, you stay at it because you’ve always had this thinking that “this person is the one, what if I let it go?” I think Ted and I (yes, we’re close, he’s my fiance!) has it on backwards. We have to get into something without thinking that this person is the one and if that person is indeed the one then we’ll figure it out along the way, not at the beginning of it.
So I guess teachers were wrong in saying that you don’t learn anything from TV, because all of this life lessons I learned from How I Met Your Mother and I think I’ve totally evolved.
Come to think of it, I have also evolved because of 500 Days of Summer. I think the educational system needs a change. We need to produce Emotionally Competent individuals as well, this way, no one would cry during prom night or any other nights after that.
But that’s a whole other story.
PrevPrevious
NextNext